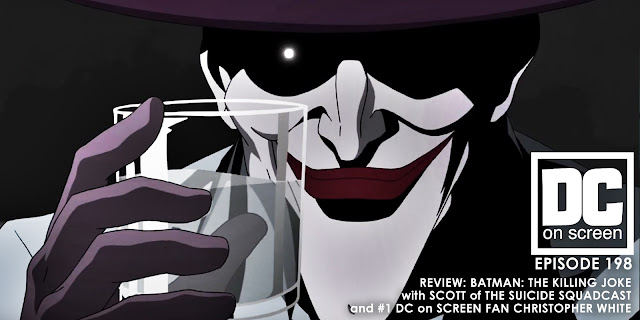  
Bruce Timm and his friends at WB Animation have finally done it.  They've made an adaptation of Alan Moore and Brian Bolland's beloved-but-bashed graphic masterwork, "Batman: The Killing Joke".  What's more, they've done so with the voice talents of Kevin Conroy, Mark Hamill, and Tara Strong!  But the film has received criticism as well -- lots of it, in fact.  Join us as we team with our friends, Scott from The Suicide Squadcast and DC on SCREEN mega fan Christopher White for this rapid-fire review of a film we've all been waiting for. Was it worth the wait?
at July 27, 2016
Email ThisBlogThis!Share to TwitterShare to FacebookShare to Pinterest
Labels: Batgirl, batman, bruce timm, joker, kevin conroy, mark hamill, podcast, review, Tara Strong, the killing joke