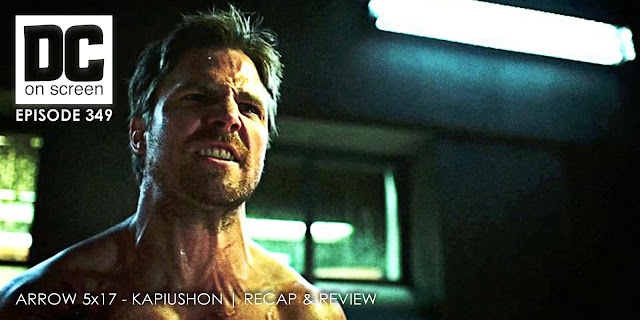 Download Arrow 5x17 - Kapiushon | Recap & Review
 
SPOILERS/NSFW - DC on SCREEN #349 - Arrow 5x17 - Kapiushon | Recap & Review - Back in Russia, Anatoli and Oliver take aim at Kovar’s plans for a political coup. They fail at first, but with some cooperation from an in-house informant, manage to kibosh Kovar’s takeover. Oliver takes Kovar down, even against the advice of Anatoli, and seems to have the Bratva problem under wraps. Anatoli is now a leader and Oliver is made a captain. Unfortunately, Kovar isn’t completely dead. In the present, Chase has Oliver in his custody and the torture is underway. He shoots him with arrows, threatens Felicity and the crew, and even puts him through a deathmatch with Evelyn in search of an ambiguous confession. Oliver finally admits that he likes killing people and Chase lets him go. Oliver returns to his anxious team and announces that he’s done with aaaaaaaall this.
at March 27, 2017
Email ThisBlogThis!Share to TwitterShare to FacebookShare to Pinterest
Labels: 5x17, arrow, dc comics, kapiushon, podcast, recap, review