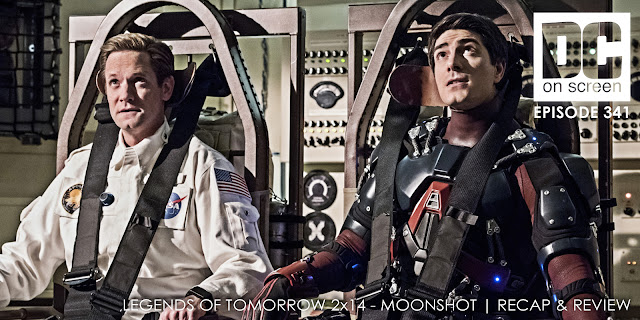 Download Legends of Tomorrow 2x14 - Moonshot | Recap & Review
 
SPOILERS/NSFW - DC on SCREEN #341 - Legends of Tomorrow 2x14 Moonshot | Recap & Review The Legends track Commander Steel to Houston where he’s helping with the infamous Apollo 13 mission. They quickly realize that Eobard Thawne has taken over the craft and is trying to retrieve the piece of spear hidden in the American flag Steel left on the moon. Sara and the Waverider manage to rescue the Apollo crew members, but Ray and Eobard have to team up to get their piece of the ship off the moon while Victor distracts Houston with a song. With everyone back on the Waverider and the Apollo crew back on course, the depleted Waverider manages to get back to Earth, but only after trusting Eobard’s fancy future space math, and the sacrifice of Commander Steel’s life. Eobard escapes to fight another day, and Vixen, after a tussle with Nate, looks up her family’s future.
at March 18, 2017
Email ThisBlogThis!Share to TwitterShare to FacebookShare to Pinterest
Labels: 2x14, dc comics, legends of tomorrow, moonshot, podcast, recap, review