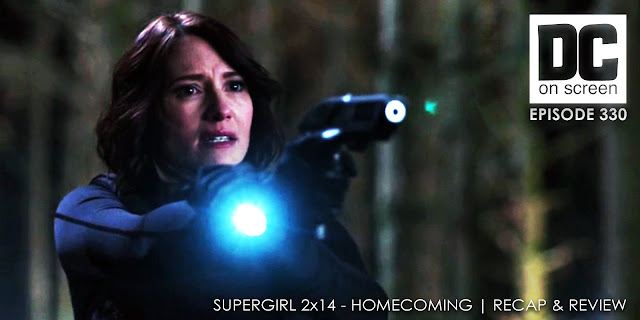 Download Supergirl 2x14 - Homecoming | Recap & Review
 SPOILERS/NSFW - DC on SCREEN #330 - Supergirl 2x14 - Homecoming | Recap & Review
The DEO gets a tip on a CADMUS weapon transport/super bomb and Supergirl and J’onn head out to intervene. They stop the caravan and find that the cargo is Jeremiah Danvers, who is grateful to be rescued and returned to his home and the DEO. The family is really pumped about this but Mon El questions the timing of their fortune, and alienates most of the crew. He recruits Winn and, after a lot of very offensive investigations and confrontations, eventually convinces everyone that Jeremiah is still working for CADMUS after Jeremiah tries to sabotage the DEO and beats the crap out of J’onn. Alex and Supergirl try to track Lilian, Super-Hank and Cyber-Jeremiah, but Supergirl is forced to save a train full of people, and Alex just can’t bring herself to shoot her pops so the last of the trio escapes. Later, at CADMUS HQ we see Super-Hank finishing a Super-flare-fueled bomb that might have something to do with the National Alien Registry Jeremiah managed to steal. Heartbroken, Alex has a few drinks and talks to Maggie. Also heartbroken, Kara has a quick cuddle with Mon El, which is touching, because she’s been mad at him about not listening but he’s going to now.
at March 05, 2017
Email ThisBlogThis!Share to TwitterShare to FacebookShare to Pinterest
Labels: 2x14, dc comics, Homecoming, podcast, recap, review, supergirl