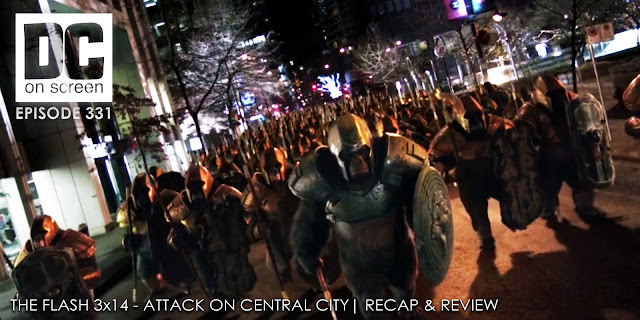 Download The Flash 3x14 - Attack on Central City | Recap & Review
 SPOILERS/NSFW - DC on SCREEN #331 - The Flash 3x14 - Attack on Central City | Recap & Review
The attack on Central City is on. Grodd’s army is knocking at the door, and it’s causing trouble. He has sent Gypsy over already and she attacks the team. Harry puts her down and they put her in the vault. Barry starts thinking he’s Oliver, and wondering if he should just kill Grodd once and for all, but Harry reminds him that he is an inspiration and there’s always another way. Anyway, Grodd’s first plan is to deploy nukes, being that he can use a general as an avatar, but the Flash disarms the bombs with moments left. That plan failing, Grodd descends upon the city, preparing to wreak havoc. But Vibe and a reluctant Gypsy have retrieved Solovar from Earth 2 and promised to sequester Grodd if Solovar takes him out without lethal force. Solovar succeeds and the Earth 2 Gorilla army marches back through Vibe and Gypsy portals to their home. To finish up, Vibe realizes he wants to marry Gypsy, Harry bids farewell and asks Wally to treat Jesse well on Earth 1, and Barry finally asks Iris to marry him. Also, Jesse asks Wally to pick up a Big Belly Burger, and Wally instead finds himself a big helping of Savitar.
at March 05, 2017
Email ThisBlogThis!Share to TwitterShare to FacebookShare to Pinterest
Labels: 3x14, Attack on Central City, dc comics, podcast, recap, review, the flash