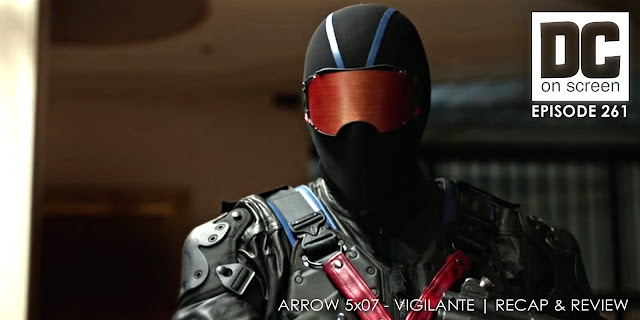 SPOILERS/NSFW - DC on SCREEN #261 - Team Arrow is dealing with 2 serial killers now, not including Oliver, as they discover that Prometheus isn’t responsible for a string of recent homicides.  Oliver wants to capture Vigilante even though some of the team thinks a guy killing bad guys ain’t all that bad.  Diggle has the idea to rob a bank to draw out Vigilante, which gets Oliver some face time with him but that’s all.  Rene pulls a solid for a frustrated Diggle and helps get his family into the hideout for his boy’s birthday.  Oliver and his reporter friend start to get a little friendlier.  Lance admits that he never actually got on the wagon and Thea convinces him to go to rehab, promising that his job will wait on him. Meanwhile, it turns out Artemis was working for Prometheus the whole time! And back in Russia, the Bratva and Kovar Konstantine were working together the whole time.