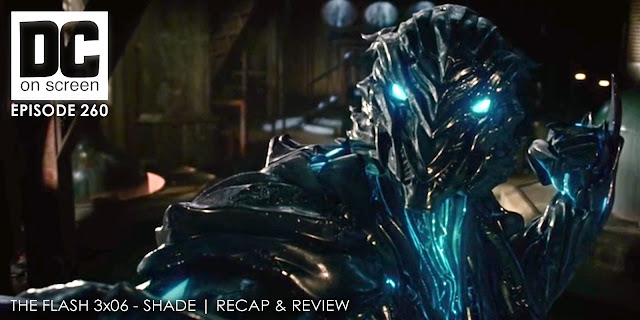 SPOILERS/NSFW - DC on SCREEN #260 - Wally is having flashbacks about his Flashpoint identity as Kid Flash. Barry realizes the only way to keep Wally safe from Dr. Alchemy’s influence is to come clean about what Wally was in the other timeline and come up with a plan.HR suggests locking him up and no one has a better idea, that is until Wally suggests he follow Alchemy’s voice so they can locate him and spring a trap. Team Flash and Joe’s SWAT team find Alchemy and seemingly disarm him until Savitar, the God of Speed, shows up and pins Barry against a wall with frightening ease. In the commotion, Wally grabs Alchemy’s stone, which encases him in a cocoon. Elsewhere, Caitlin reveals her secret to Cisco who forces her to reveal it to the team. To comfort her Barry reveals that she wasn’t Meta before he changed everything and apologizes for what he’s done to her. HR finds a handy face transmogrifier so he can go outside. Oh, and Shade shows up for a minute and the team swiftly deals with him.