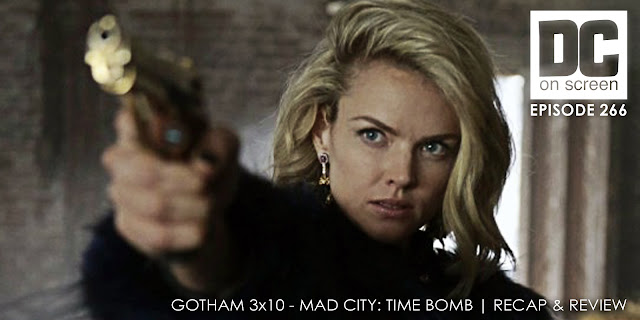 SPOILERS/NSFW - DC on SCREEN #266 - Gotham 3x10 – Mad City: Time Bomb | Recap & Review - Nygma sets up a torture room for Butch and Tabitha to avenge his fallen Isabella, but discovers during his climax that Butch really is innocent.  He’s also a sweet guy, which costs Tabitha a hand.  Barbara, who’s been doing some research herself, retrieves Butch, Tabatha, and the lost hand and gets them to a hospital.  Once Tabatha is safe she realizes that Penguin had Isabella killed in a jealous rage and enlists Butch to help her start a war.  Someone keeps trying to kill Mario Falcone right before his wedding to Lee, and it appears to be the Court of Owls.  Bruce and the gang investigate the key Ivy hauled in while Ivy gets kidnapped again.  They meet the kidnappers, The Whisper Gang, who tell them everything about everything, ever.  They’ve been working against the Court and Bruce promises to help.  That relationship is short, however, as the leader of the Whisper Gang is soon executed by a Talon.  Carmine Falcone seems to have an understanding with the Court that Mario needs to stay alive, and Mario flies into a jealous, Alice-infected rage when he sees Lee leaving Jim’s apartment.