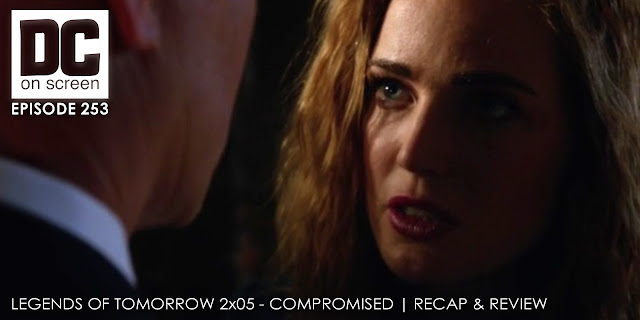 SPOILERS/NSFW - DC on SCREEN #253 - Legends of Tomorrow 2x05 – Compromised | Recap & Review
The Legends trace a time quake all the way back to Reagan’s White House and find that Damien Darhk has made himself a Senior Advisor.  At first Sara tries to kill him.  Later, Vixen convinces her that restraint would serve her better, so she just tells him everything he needs to avoid in the future instead.  Stein has a heart to heart with his younger, brasher self, telling him to cherish his relationship with Clarissa above all else.  Ray and Mick go on an emotional journey as they both learn that Ray will never be Snart and should just be proud of being himself.  Vixen and Obsidian catch up on why she ditched her old team back in 42.  And Eobard Thawne shows up to take Darhk somewhere in a time sphere.
Labels: 2x05 Compromised dc comics legends of tomorrow podcast recap review