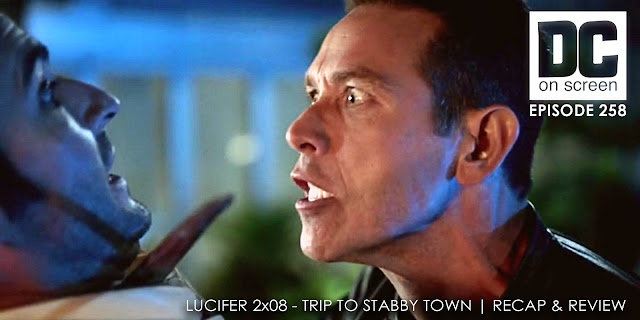 SPOILERS/NSFW - DC on SCREEN # 258 - Azrael’s blade has made its way to human hands.  Some cursory investigation reveals that Charlotte is involved.  After being confronted by Lucifer she admits to unleashing the blade in an attempt to get God’s attention so she could mourn with him about the death of Uriel.  Azrael’s blade, still at large, makes its way to another crime scene, where it is finally seized by Detective Dan.  Realizing who has the blade, Lucifer confronts him.  Dan accuses him of ruining his marriage and stealing his pudding.  The blade wants Dan to go to Stabby Town but Dan somehow resists, which gets him a little bit of street cred from Lucifer.  Linda is still way freaked out by the fact that she’s done the dirty with Satan himself, but realizes he’s just a troubled soul who needs the help of a competent therapist.  Elsewhere, Ella takes a leap of faith and helps Lucy with a burial site investigation, which seems to make Chloe a little jelly.