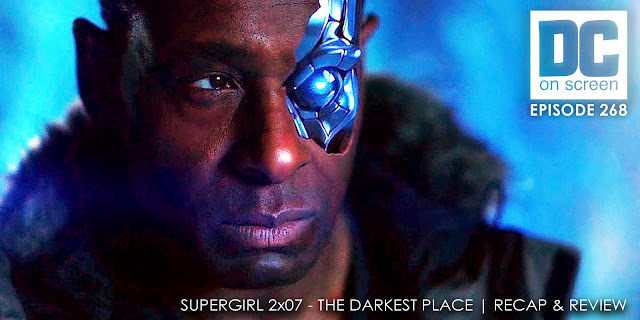 Download Supergirl 2x07 - The Darkest Place | Recap & Review
 SPOILERS/NSFW - DC on SCREEN #268 - Supergirl 2x07 - The Darkest Place | Recap & Review - The Guardian has been kicking some criminal behind and earning the city’s trust, but it all slips away when he’s framed for murder. It’s okay though because Winn folds with record speed to Alex’s interrogation but now she can ask Maggie to back off Guardian, who eventually does clear his name after all. Hank Henshaw is alive and Super well. He’s Cyborg Superman now and he and Cadmus need a little bit of Supergirl blood. After capturing Mon-el last episode, Cyborg Superman puts the kibosh on Supergirl’s escape mission and throws her in the cell next to him so they can have heart-to-hearts. Cadmus forces her to Super Flare so she’ll be vulnerable, then takes a blood sample. The two captives later escape thanks to none other than Jeremiah, who has been fooling Cadmus the whole time and is super proud of his daughters. Alex agrees to try to remain friends with Maggie, while Mon-el asks about whether Kara is mated with anyone. Finally, Hank shows us that the blood was needed to break into the Fortress of Solitude and ask about a project called MEDUSA. Meanwhile, J’onn learns that due to M’Gann saving his life, he is now turning into a white martian while there may be hope for Alex and Maggie after all.


Where to Find Us:
Subscribe to the Show: iTunes | Stitcher | Google Play | RSS