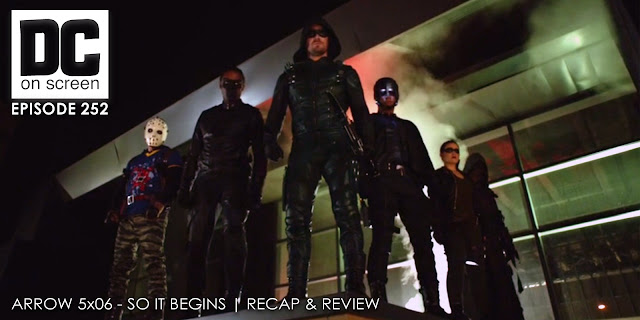 SPOILERS/NSFW - DC on SCREEN #252 - Arrow 5x06 – So It Begins | Recap & Review
New Team Arrow is shocked by Oliver’s serial killing exploits after it is revealed that Prometheus knows about his father’s to-do list.  After quelling a riot and having some schnapps the team tries to stop Prometheus’ next Throwing Star murder anyway, which damn near gets Artemis killed.  Thea throws a big ol festival to try to rally the city’s spirits in between attempts to get a booze-riddled Lance to an AA meeting.  Felicity realizes she’s being a little too Oliver and tells her boyfriend about her work with Team Arrow, which goes surprisingly well.  Back in Russia, Oliver goes on an undercover Bratva mission that ends poorly.  He now sits, tied to a chair, hoping Konstantine Kovar will either kill him or stop talking about turnips.  Oh, and Prometheus has access to SCPD evidence locker, and the red herring says Quentin Lance is Prometheus!