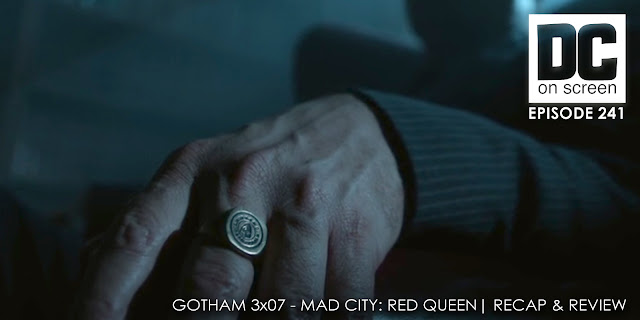 SPOILERS/NSFW - DC on SCREEN #241 -Gotham 3x07 - Red Queen | Recap & Review -Following the dinner at Hatter’s place, Lee and Valerie Vale are done with Jim.  Hatter, not through with his reign of vengeance, liberates Alice’s body from the GCP mortuary with the intention of poisoning the city from within.  Thinking ahead, Tetch sidelines Gordon with some super-acid that sends James on a search for himself.  Gordon’s private Woodstock reminds him that his fathers’ ring is the key to finding his true path, which is to protect people.  Later, a man wearing the same ring tells the head of the Court of Owls that judgement is upon all of them.  Hatter hijacks the city’s most important dinner of the year but is thwarted by a Hulked-out Barnes and crew.  Meanwhile, Penguin selfishly tries to derail the up-spring love story of Ed and Isabella, but Isabella is apparently okay with Ed being a murdering ex-Arkhamite.  Also, Bruce is annoyed that Selena is late to his hard-slaved dinner but they both admit that this whole new thing is weird so it’s kind of okay.