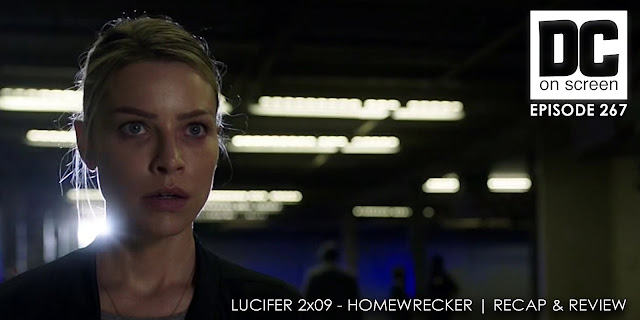 Download Lucifer 2x09 - Homewrecker | Recap & Review
 SPOILERS/NSFW - DC on SCREEN #267 - Lucifer 2x09 - Homewrecker | Recap & Review  - The new owner of Lux wants to sell everything and piss off his dead father’s ghost.  Lucifer hastily leaves the scene of an investigation to deal with a problem at Lux, only to find that his precious home and shrine to debauchery is to be closed and turned into a shopping mall.  His efforts to convince a string of new owners to reconsider lead him back to Chloe and her homicide.  Luci can’t talk anyone out of the shopping mall though, so he resorts to partying so hard that the movers physically cannot perform their job.  Even Chloe helps.  Mom kicks her evil machinations into overdrive as she sleeps with Dan and tries to blow up Lux so her son won’t have a reason not to help her anymore.  Lucifer’s big bash thwarts her efforts since the club isn’t empty and she resorts to just trying to blow up Chloe.  This week’s murder solved, Chloe reveals to Lucifer that she’s pulled some strings and gotten Lux classified as a historical landmark, protecting eternally from bulldozers and shopping malls.  He demands she let him at least take her to dinner for such an extraordinary gesture and she agrees.  He stands her up, however, after his therapist points out that he may have stronger feelings for Chloe than he’d like to admit.  A highly annoyed Chloe leaves the restaurant in a huff where we find that Lucifer’s Mom has repurposed her bomb to be Chloe-sized.