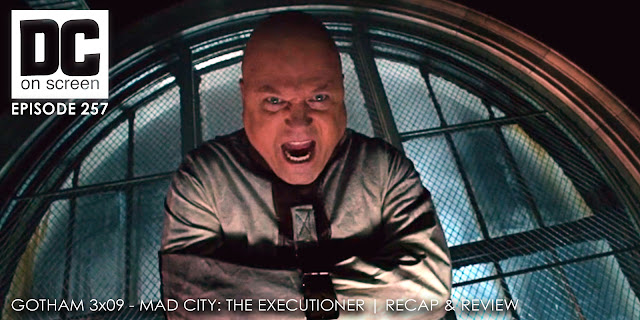 SPOILERS/NSFW - DC on SCREEN # 258 - Gotham 3x09 – Mad City: The Executioner | Recap and Review - Gordon convinces a very skeptical Bullock to look into whether Barnes could be responsible for Symon’s murder, while Barnes decides that Gordon is either going to be recruited or executed.  He takes Gordon for a ride, has his recruitment speech shut down, then tries to kill or frame Gordon.  At the last minute Bullock and the GCPD show up to save Gordon from the end of the line.  Barnes earns a strait jacket for his efforts.  Penguin’s sloppy hit on Isabella has consequences as Nygma quickly uncovers foul play, but Pengers can relax because Ed thinks Butch is the culprit.  Ivy gets in too deep when she drugs a smarmy rich guy, steals his emerald, gets caught, then shows up at an incredulous Selena’s hideaway.  Turns out she stole some kind of key and some Talon-looking hitmen are very interested in where the key, Ivy, Selena now, and, obviously, Bruce are holed up.