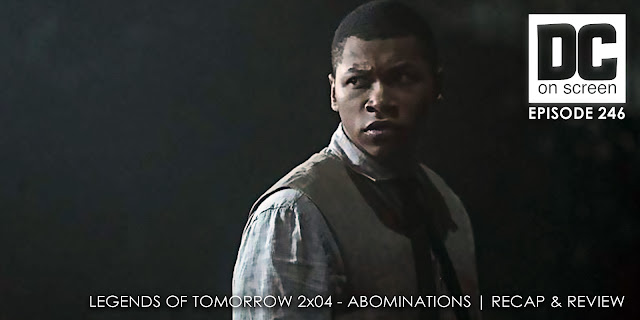 
SPOILERS/NSFW - DC on SCREEN #241 - Legends of Tomorrow 2x04 - Abominations | Recap & Review
Mississippi, 1863. A rogue time pirate crashes and accidentally unleashes a zombie virus.  The Legends respond to his S.O.S. message only to find Henry Scott, a slave-turned-spy for the Union army who missions to retrieve Confederate plans and a gaggle of Confederate Zombies. Henry gets killed, and Jax takes it upon himself to carry on where history says Henry Scott should.  Jax and Amaya go to find the Confederate plans at a plantation, but find more than they bargained for real life slavery right in front of them.  Amaya wants to help, but Jax cautions that it could alter the timeline.  Until he of course changes his mind.  Meanwhile, Sara and Nate help fight a Confederate Zombie horde with a surprisingly heroic, non-alcoholic General Grant while Stein and Ray stay on board and run around the ship in the dark trying to subdue Zombie Mick.