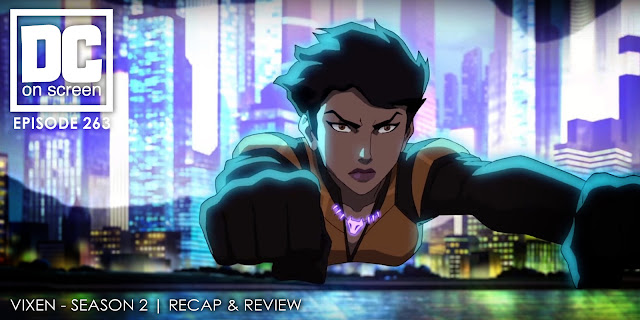 SPOILERS/NSFW - DC on SCREEN #263 - Vixen - Season 2 | Recap & Review - Mere weeks following the events of season 1, Mari crashes a lecture by traitorous-yet-apologetic Professor Macalaster who tells her (and a hall full of intellectual types) about the five Zambezi totems earth, fire, air, water, and spirit (sounds like the planeteers) of which they have found one: fire.  Mari of course has the spirit totem. He reveals they’ll be keeping it at the Detroit Museum. Cisco calls Mari to help with a situation with Weather Wizard, who has created a number of tsunamis at Monument Point, and Mari gets hurt stopping him.  Meanwhile, the fire totem is stolen from the Museum. Mari searches for the thief, and finds Benatu Eshu of Zambezi.  Eshu claims that Mari looks just like her mother and then kicks her ass with fancy new fire totem powers! Mari and Macalester go to find her sister Kuasa in an African hospital, and she suggests going with them to find the water totem which just happens to be in Star City.  Kuasa of course double-crosses Mari, but is stopped by Mari’s plan B, The Atom and Black Canary. Eshu begins destroying Detroit.  Kuasa and Mari with the help of Atom and Black Canary try to stop him.  Eshu kills Kuasa, and after he defeats Black Canary and Atom, Mari fights him and drowns him.  At Macalaster’s instruction, Mari summons all the strength of her animal spirits to crush the fire totem to destroy its power. At the end, Mari decides to team up with Arrow, Flash, and a number of other heroes as they take on a new, undisclosed threat.
at November 22, 2016
Email ThisBlogThis!Share to TwitterShare to FacebookShare to Pinterest
Labels: cw seed, dc comics, podcast, recap, review, season 2, vixen