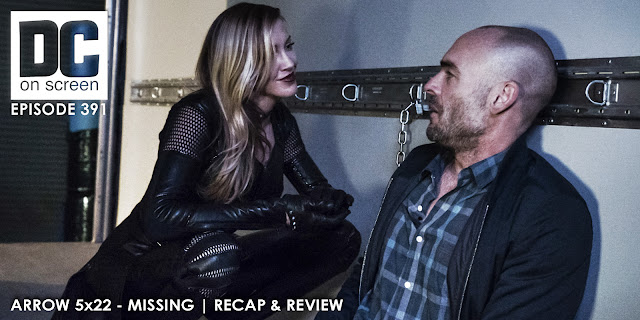 Download Arrow 5x22 – Missing | Recap & Review
 
DC on SCREEN #391 - Arrow 5x22 – Missing | Recap & Review
Despite a surprise birthday for Arrow by the Arrow Gang, the team is picked off one-by-one until it’s just Oliver, Diggle, and Felicity.  Oliver sends Diggs and Felicity away in hopes of out-maneuvering Chase but it doesn’t work.  Adrian moves all of Oliver’s loved ones to Lian Yu to draw him out.  In the meantime, Merlyn shows up to help, because ultimately he wants to keep Thea safe.  Oliver resists Chase’s taunts until he sees his son has been taken as well.  After that, he and Merlyn help Adrian escape custody.  In the flashbacks, Kovar tries to pharmaceutically incite Oliver to kill himself, but the vision of Laurel helps him overcome the shame and guilt so he uses his single bullet to escape his cage instead.