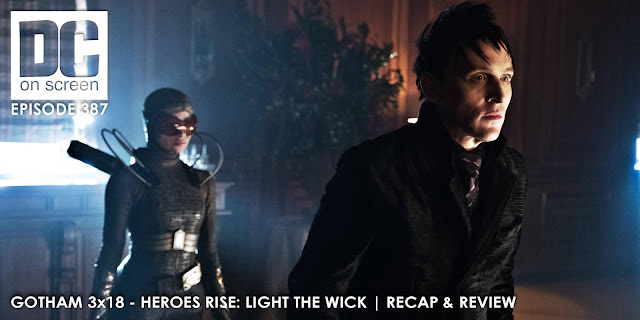 Download Gotham 3x18 – Heroes Rise: Light the Wick | Recap & Review
 
DC on SCREEN #387 - Gotham 3x18 – Heroes Rise: Light the Wick | Recap & Review
Gordon uncovers the weapon the Court of Owls plans to use to Control-Z Gotham.  He tries to play along but he just can’t watch a bunch of people die.  He calls Penguin in for backup, which works, but eventually Pengers ends up in lock up with Nygma.  Leslie tries again to incite interest in the death of James’ uncle but after a blanket of resistance she packs up and leaves town.  Bruce’s training hits new heights as his shadowy sensei reveals that Bruce is part of the Court’s plan to reset Gotham.  Elsewhere Selena is revived by Ivy and sets out to kill Dopple-Bruce.