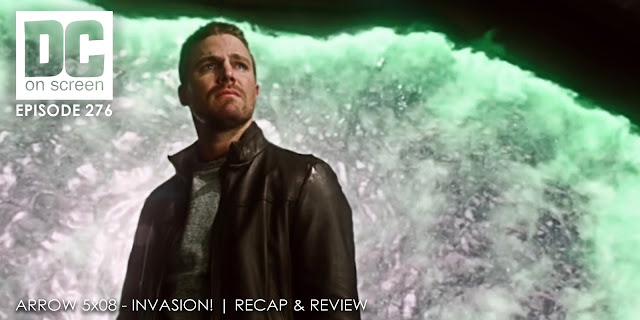 Download Arrow 5x08 - Invasion! | Recap & Review
 
SPOILERS/NSFW - DC on SCREEN #276 - Arrow 5x08 - Invasion! | Recap & Review
Oliver, Thea, Diggle, Ray, and Sara are just plain happy.  Oliver is happy to marry Laurel.  Quentin is happy to see his oldest daughter hitched to a reformed Oliver.  Sara is happy to dote over her sister in the days before her wedding.  Thea and Oliver are beside themselves with both parents alive, well, and extremely supportive.  Ray is with Felicity and hasn’t a complaint in the world.  And Diggle is happy to be the Green Arrow.  Also, this is all a lie and they are trapped on a ship under Dominator mind control.  After deciding that this utopia is a pack of lies, Oliver finds his fellow abductees and confronts them with the truth.  They agree that they’re in a simulation, defeat all of their greatest enemies all at once, then head to Smoak Technologies to prison break both the simulation and a spaceship.  After Thea figures out where the on button is on the escape pod, the team shuttles away and nearly gets Tie-Fightered to death before the Waverider swoops in and rescues them.  Meanwhile, Team Arrow, Flash, and Supergirl have been hitting the streets after a Cyber Woman.  Wild Dog isn’t loving the meta-team up but decides he can deal with it when they put a beat down on the Cyber Woman and save his hyde.  Oliver and company are horrified when they realize that they were captured and mentally probed so someone would know more about the weaknesses of their super-powered colleagues.
Question: Is it just us, or is this episode just one big homage to Batman: The Animated Series' "Perchance to Dream"?
at December 05, 2016
Email ThisBlogThis!Share to TwitterShare to FacebookShare to Pinterest
Labels: 5x08, arrow, Crossover, dc comics, Heroes Vs. Aliens, Invasion!, legends of tomorrow, podcast, recap, review, supergirl, the flash