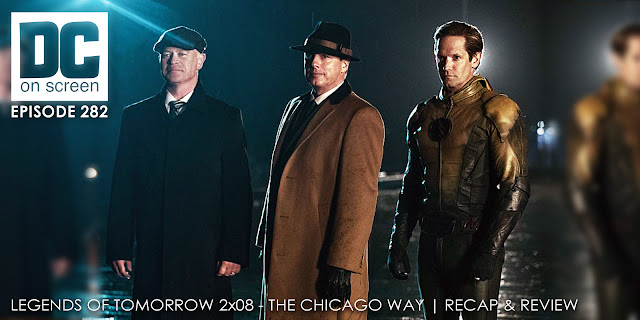 Download Legends of Tomorrow 2x08 - The Chicago Way | Recap & Review
 
SPOILERS/NSFW - DC on SCREEN #282 - Legends of Tomorrow 2x08 - The Chicago Way | Recap & Review
The Legion of Doom are up to no good as Eobard Thawne, Damien Darhk, and Malcolm Merlyn take to the prohibition-era streets of Chicago and recruit a budding Al Capone for their scheme.  Being the resident historian, Nate tries to impersonate Elliot Ness and shut Capone down but the Legion manages to capture Stein and Sara instead.  Mick takes over mission planning for a bit and manages to get Sara and Stein back, except that Stein is actually a disguised Thawne who begins ravaging the ship in search of the amulet.  He finds it and nearly kills Sara but she is saved by some alarm on his fancy watch.  After reluctantly telling Sara that he has created an aberration named Lily, Sara trades the amulet for the real Stein and even absolves him of his guilt for not wanting to time-kill his daughter.  Amaya gives Mick a present that she stole just for him, which Mick loves dearly.  Too bad he has to justify it to his old friend Snart, who has been appearing in visions recently.  The Legion has their map and is out to find the spear of destiny and Rip Hunter may have found his calling as a sleazy, American action director in the late 60’s.
at December 11, 2016
Email ThisBlogThis!Share to TwitterShare to FacebookShare to Pinterest
Labels: 2x08, dc comics, legends of tomorrow, legion of doom, podcast, recap, review, The Chicago way