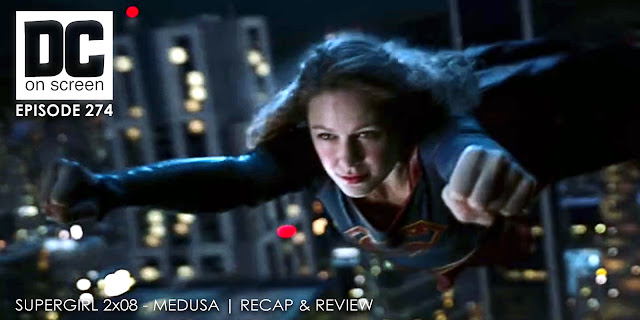 Download Supergirl 2x08 - Medusa | Recap & Review
 
SPOILERS/NSFW - DC on SCREEN #274 - Supergirl 2x08 - Medusa | Recap & Review Thanksgiving at Kara’s house gets off to a rocky start as James and Wynn want to confess their vigilante lifestyle but Alex has confessional plans of her own. Everyone’s plans are thwarted though by space/time rupturing above the dinner table. Mon-El has a hard time at the alien dive bar as he gets his ass kicked by Cyborg Superman and is sickened by a virus made to kill aliens wholesale. Kara discovers, to her great disappointment, that this biological weapon was designed by none other than her father. Eliza Danvers uncovers the workings of the aerosolized virus and points out an isotope needed for its dispersal. Supergirl and the gang show up just in time to stop Hank Henshaw from getting his robotic hands on it, but Maggie takes a hit, which gives her and Alex a chance to bond over some minor surgery. Kara confronts Lena about her mother and gets the cold shoulder. Lena then offers to help her mother and her dastardly, alien-erasing scheme. Her mother accepts Lena’s help, but later regrets it as Lena has reversed the effect of the isotope and rendered Mom’s giant weapon useless. Eliza uses the xenovirus to find a cure for both Mon-El and the nearly-White-Martianed J’onn. She also finds time to let Alex know that she’s okay with her being way into Maggie. Which is good timing all around because Maggie’s near death experience has shown her that she’d rather take her chances with Alex after all. Some faceless people are after Mon-El but- wait, Barry Allen and Cisco Ramon cross universes to ask Supergirl for help.
at December 05, 2016
Email ThisBlogThis!Share to TwitterShare to FacebookShare to Pinterest
Labels: 2x08, dc comics, Medusa, podcast, recap, review, supergirl