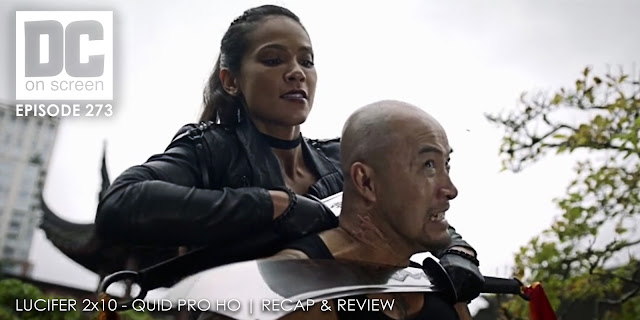 Download Lucifer 2x10 - Quid Pro Ho | Recap & Review
 
SPOILERS/NSFW - DC on SCREEN #273 - Lucifer 2x10 - Quid Pro Ho | Recap & Review Perry Smith, the man who killed Chloe’s father, is officially on trial. Lucifer discovers this when he shows up to apologize for standing her up. However, he quickly realizes the self-centeredness of his actions and joins Team Decker in court. He also quickly realizes that his Mom is in charge of Perry’s defense. This is part of her new plan to destroy Chloe in Lucifer’s eyes, since Amenadiel has convinced her that just blowing her up would be counterproductive. It even seems that Mom will have a quick day in court after the head of the prosecution’s key witness arrives in a box on Dan’s desk. Lucifer testifies on behalf of said witness to link Perry to the killing but Mom turns everything around on him, making it seem plausible that Chloe herself is implicated in one of Perry’s crimes. Vowing to avenge his misstep, Lucifer sets out with Dan and Maze to find the witness’ killer. They track everyone down but only find more dead bodies, which are no good on a witness stand. Chloe is forced to take the witness stand and Mom tries to make her betray Lucifer’s trust by calling him a liar. She refuses, offering tearful recognition of how much she depends on him instead. This doesn’t actually help the case at all so the warden walks home a free man. But not for long, because Dan and Maze use the Russians to have him kidnapped and presumably executed. Lucifer finally makes good on his promise to feed Chloe, but Amenadiel meets Chloe’s mom and remembers that time he blessed a couple and they spawned a miracle child. Amenadiel recounts the encounter to his Mom, who promises that Chloe is their ticket home.
at December 05, 2016
Email ThisBlogThis!Share to TwitterShare to FacebookShare to Pinterest
Labels: 2x10, dc comics, Lucifer, podcast, quid pro ho, recap, review, vertigo