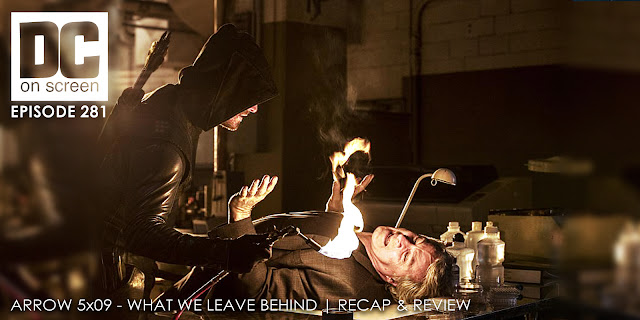 Download Arrow 5x09 - What We Leave Behind | Recap & Review
 
SPOILERS/NSFW - DC on SCREEN #281 - Arrow 5x09 - What We Leave Behind | Recap & Review
Susan and Oliver are getting chummy enough that Mayor Queen officially invites her to the city’s Christmas party.  That’s good, because he’s seriously gonna need a drink and a shoulder to cry on later.  Felicity and Curtis try to introduce their significant others at the party but Felicity’s trademark awkwardness get Curtis into trouble.  As he and Paul are leaving the party in a huff, Prometheus attacks Curtis, who defends himself a little too well but still gets his ass beat.  At the hospital he finally tells Paul that he’s a vigilante.  Paul demands he quit immediately or their marriage is over but ultimately decides he has to leave either way.  Much as he loves Paul, Curtis decides that his true place is on Team Arrow.  Oliver tracks down some bread crumbs left him by Prometheus and discovers that his foe is the son of one of his Season One victims and that Artemis is a traitor.  Prometheus says that everything Oliver touches or loves eventually dies.  To prove his point he lures Oliver to a location and baits him into killing Felicity’s new boyfriend, Detective Malone.  He tearfully informs the team, who swear that Prometheus is wrong about Oliver and vow to support him.  Oliver seeks that Susan shoulder we talked about earlier while someone with Lyla’s voice tricks Diggle into getting captured by the authorities.  Finally, Oliver returns to the hideout, ready to get back to work only to find a perfectly alive-looking Laurel staring at her old Black Canary uniform.

at December 11, 2016
Email ThisBlogThis!Share to TwitterShare to FacebookShare to Pinterest
Labels: 5x09, arrow, dccomics, midseason finale, podcast, recap, review, What We Leave Behind