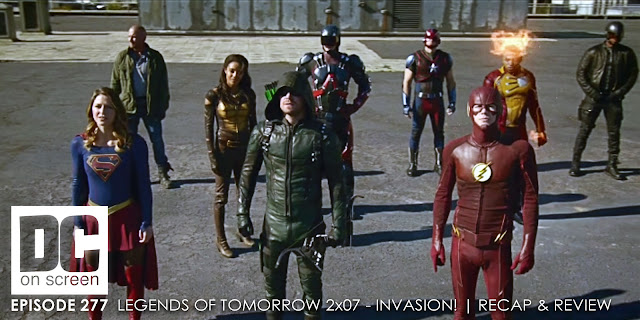 Download Legends of Tomorrow 2x07 - Invasion! | Recap & Review
 
SPOILERS/NSFW - DC on SCREEN #277 - Legends of Tomorrow 2x07 - Invasion! | Recap & Review
The whole team shows up to fight some aliens.  Except Supergirl, who Oliver tries to sideline to regain some normalcy.  It’s okay though, because she shows up anyway when they fight a ton of aliens!  The Legends travel back in time to kidnap and interrogate a Dominator.  Mick, Nate, and Maya managed to get captured, along with the alien, who tells them he’s here to determine if they are a threat.  Cisco and Felicity show up to save the crew.  Cisco also insists they save the Dominator from painful government interrogation.  It’s a nice gesture, but all it gets them is a chance to surrender Barry in exchange for the lives of every meta on the planet.  Turns out the Dominators had a truce with Earth’s government to stay away but when Barry broke time the truce went with it.  Barry is willing to comply to assuage his guilt over Flashpoint and to save all of his fellow metas but the team won’t let him.  Stein and his newfound daughter come up with a nifty gadget that will disable the Dominators if someone can get it on their bodies.  The rest of the heroes hold off the aliens while Flash and Supergirl slap on some incapacitating nanotech.  Also, Firestorm turns their giant, meta-killing bomb into a giant water drop.  Afterwards, the team gets some high praise from the new president, Cisco gives Supergirl a device that can transport her to and from Earth 38 when needed, and Barry and Oliver have a much-deserved drink where they discuss the fullness and strangeness of life.
at December 05, 2016
Email ThisBlogThis!Share to TwitterShare to FacebookShare to Pinterest
Labels: arrow, Crossover, dc comics, dctv, Heroes Vs. Aliens, Invasion!, legends of tomorrow, podcast, supergirl, the flash