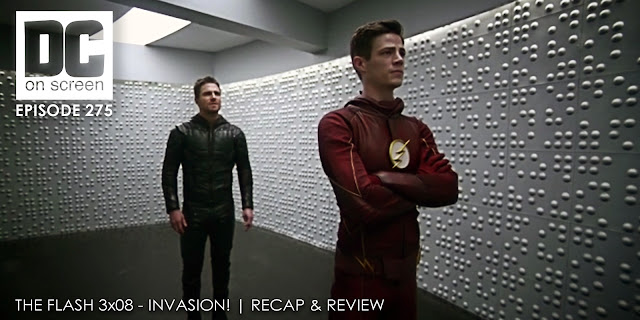 Download The Flash 3x08 - Invasion! | Recap & Review
 
SPOILERS/NSFW - DC on SCREEN #275 - The Flash 3x08 - Invasion! | Recap & Review
The Dominators arrive and The Flash is pretty spooked.  He runs over to Star City to recruit Oliver and company, then hurriedly engages the services of the Legends of Tomorrow.  He and Cisco also pop over to Earth 38 to enlist Supergirl.  Team assembled, he explains that aliens are both real and pretty vicious.  The team commences training with their very own alien until Cisco finds Barry’s message from the future.  Barry confesses that he created a new timeline and wreaked a whole lot of havoc on everyone’s lives, which causes some team unrest.  The team has a lead on where to find the abducted president but opts to leave Barry behind.  Oliver sides with Barry and stays behind as well.  The team is quickly defeated by some alien mind-control mojo.  They immediately begin to terrorize the city.  Oliver and Barry try to control the situation but it’s a lot against a little until Wally goes rogue and shows up to incapacitate a few metas.  Wally goes down pretty fast but it’s enough time for Oliver to distract everyone while Barry tricks Supergirl into destroying the object that is controlling their minds. In the aftermath of the battle all of the non-meta heroes are abducted.  Wally wants to keep hero-ing but Iris, Joe, and Barry are dead against it.  However, HR agrees to help the young speedster level up.
at December 05, 2016
Email ThisBlogThis!Share to TwitterShare to FacebookShare to Pinterest
Labels: 3x08, arrow, Crossover, dc comics, Heroes Vs. Aliens, Invasion!, legends of tomorrow, podcast, recap, review, supergirl, the flash