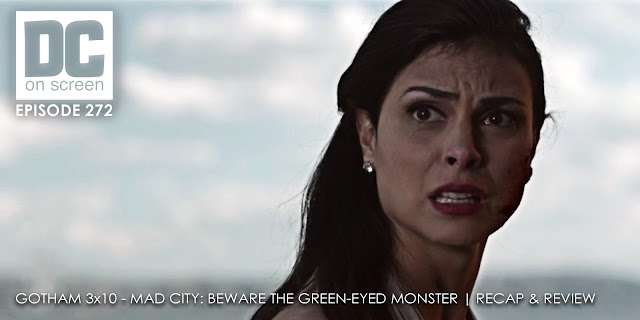 Download Gotham 3x11 - Mad City: Beware The Green-Eyed Monster | Recap & Review
 
SPOILERS/NSFW - DC on SCREEN #272 - Gotham 3x11 - Mad City: Beware The Green-Eyed Monster | Recap & Review
Mario Falcone breaks into the facility working on a cure for the Tetch virus, crushes a lab tech’s head, and steals enough info to fake his blood test and make him look uninfected. Later, he beats the crap out of Gordon, but leaves him alive. Following a handy clue, Jim sets out to Arkham where he throws down some rhymes with Jervis and discovers Mario is going to kill Lee.  Jim has Mario tested for the virus but the tests come back negative. Desperate to save Lee, Jim rushes to confront her on her wedding day. He quickly realizes that Mario’s plan was to make him look like a jealous ex. Not appreciating the last-minute confessional, Lee throws him out and Falcone’s men put a beat down him. The wedding proceeds as planned and the newlyweds head out of town.  Gordon, undeterred, demands Carmine Falcone tell him where they are, promising to do no harm to Mario.  Carmine accepts the terms, but when Jim shows up Mario’s jealousy has gotten the best of him and Jim is forced to put him down. Meanwhile, Bruce and Alfred want to proceed with the plan to loot the Court of Owls’ vault.  When the Whisper Gang seemingly stands them up Selina reluctantly decides to help but doesn’t like the setup because she feels like someone is watching them. The heist proceeds anyway and they manage to steal a giant crystal owl before the Court’s assassin shows up to do some killing.  Everyone pitches in but they are nearly overwhelmed before Selina’s mom steps in.  Barbara is busy starting a war as she discloses Penguin’s true feelings and motives to Ed.  He investigates briefly and discovers that, yes, Oswald killed Isabella. In retaliation, Nygma vows to help Barbara take Penguin’s place in the underworld if she first helps him destroy Penguin completely.
at December 05, 2016
Email ThisBlogThis!Share to TwitterShare to FacebookShare to Pinterest
Labels: 3x11, beware the green-eyed monster, dc comics, gotham, Mad City, podcast, recap, review