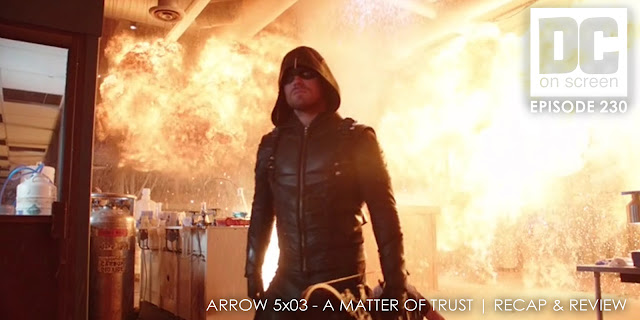 Download Arrow 5x03 - A Matter of Trust | Recap & Review
 
SPOILERS/NSFW - DC on SCREEN #230 - Arrow 5x03 – A Matter of Trust | Recap & Review
Oliver still doesn’t trust his new team—he doesn’t feel they are ready.  Meanwhile, a new drug dealer, Garret Runnels, is making some next level shit called Stardust.  In an over-zealous fit, Wild Dog drags Evelyn Sharpe into a recon mission that turns into a full-on battle that ends in Runnels falling into a vat of chemicals that makes him impervious to pain.  With the city thinking him dead, Runnels begins a new mission to make an army like himself.
Oliver as Mayor is being dragged through the dirt as the media is having a field day with him appointing alcoholic Quentin Lance as Deputy mayor, then with him not knowing about the appointment in the first place.  Thea offers to resign from her position since the media problem was her mistake, and Oliver, having learned to trust his new team in the Runnels mission, keeps her aboard and stands by Quentin.
Oh, and Felicity tells Rory that it was she who directed the nuke to his home town of Havenrock.
Review us on iTunes for a chance to win a trade paperback, DVD, or Blu Ray valued at $15 or less!
at October 23, 2016
Email ThisBlogThis!Share to TwitterShare to FacebookShare to Pinterest
Labels: 5x03, A matter of Trust, arrow, dc comics, podcast, recap, review