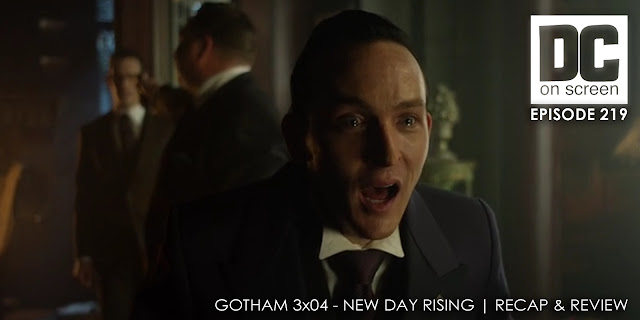  
SPOILERS/NSFW - DC on SCREEN #219 - Gotham 3x04 – New Day Rising | Recap & Review
Jervis Tetch recruits the Terrible Tweeds, a Luchador wrestling team of brothers to help him in his quest to get his sister Alice back.
Meanwhile, Jim can’t stop trying to off himself whenever he hears something that sounds like a clock.  Tetch’s hypnotism still at play.   Jim beats the hold over Tetch, and Alice winds up dead.
Penguin is running a bang-up campaign for mayor, but he doesn’t want to leave anything up to chance.  Edward doesn’t think Penguin needs to bribe anyone to get the votes, and shows Penguin how much the city loves him—making Edward the go-to over Butch for the chief-of-staff position .
Bruce and Alfred look for Doppleganger Bruce.
Doppleganger Bruce hangs out with Selena, gets discovered and gets a kiss. Then rubs it in Bruce’s face, the dick! But then he gets grabbed by that wily court of owls!
Oh! And Barnes gets infected with Alice’s blood!
Review us on iTunes for a chance to win a trade paperback, DVD, or Blu Ray valued at $15 or less!
at October 16, 2016
Email ThisBlogThis!Share to TwitterShare to FacebookShare to Pinterest
Labels: 3x04, dc comics, gotham, New Day Rising, podcast, recap, review