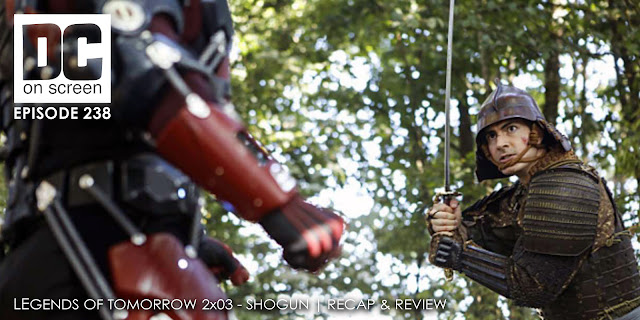 SPOILERS/NSFW - DC on SCREEN #238  -  Legends of Tomorrow 2x03 – Shogun | Recap & Review
After the death of Rex Tyler, Vixen boards the Waverider looking for vengeance. Nate wakes up and showcases his new Citizen Steel powers in time to stop her from killing Rory. Sara orders Ray to help Nate understand his new powers, but the session gets out of hand and the two go overboard, stranding themselves in feudal Japan. Sara convinces Vixen that no one on the ship killed Hourman, then hits the streets with Vixen and in search of Ray and Nate. Victor and Jefferson repair the ship so quickly that they have time to hunt down Captain Hunter’s secret compartment. In it they find a message from 2056 Barry Allen which they listen to and then heroically vow not to repeat. Back in feudal Japan, Ray loses his suit to a warlord. He escapes and finds the team, but they’re no match for a warlord in an Atom Suit. They retreat, find Nate and his new lady-friend, and decide their best option is to defend her village from her warlord suitor. Vixen, Sara and Mick defend the villagers, Ray dons some old school armor for a final showdown and Nate has performance issues. But in the nick of time Nate Steels On and destroys the suit that Ray spent billions of dollars and countless hours developing.  Also, the villagers they were protecting? Katana’s ancestors.
Review us on iTunes for a chance to win a trade paperback, DVD, or Blu Ray valued at $15 or less!
at October 30, 2016
Email ThisBlogThis!Share to TwitterShare to FacebookShare to Pinterest
Labels: 2x03, dc comics, legends of tomorrow, podcast, recap, review, Shogun