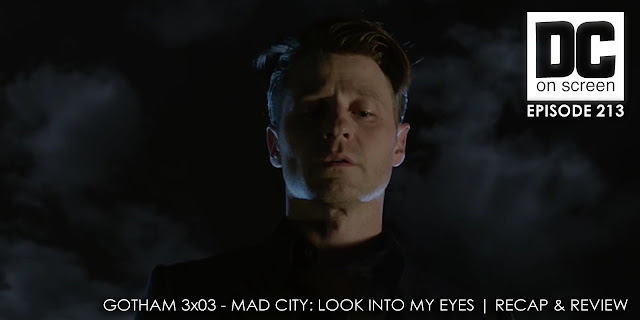 SPOILER/NSFW - DC on SCREEN #213 - Gotham 3x03 -  Mad City: Look Into My Eyes | Recap & Review - Hypnotist Jervis Tetch comes to Gotham searching for his sister Alice, a girl who apparently has the ability to infect people with SOMETHING by touching them.  Jervis hires Gordon to find her.  Gordon does, and also finds Lee’s new fiancé along the way: a new doctor in town, who unbeknownst to Jim, is the son of The Roman, Carmine Falcone.
Penguin meanwhile decides he is going to run for Mayor against Aubrey James, and also that he needs to get Ed Nygma out of Arkham.
Over at Wayne Manor, the Bruce doppleganger finds that he can’t feel pain (but can feel hunger apparently), and begins to act like Bruce to get close to Selina.
Review us on iTunes for a chance to win a trade paperback, DVD, or Blu Ray valued at $15 or less!
at October 09, 2016
Email ThisBlogThis!Share to TwitterShare to FacebookShare to Pinterest
Labels: 3x03, dc comics, gotham, look into my eyes, mad hatter, podcast, recap, review