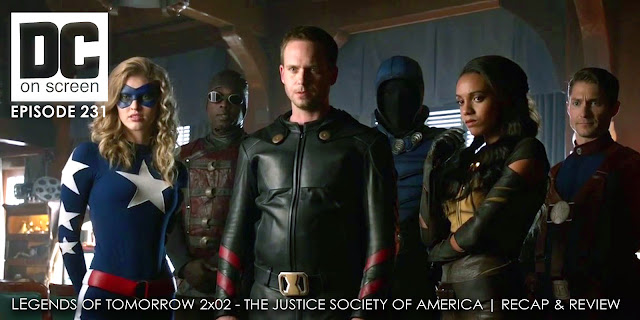 Download Legends of Tomorrow 2x02 - The Justice Society of America | Recap & Review
 
SPOILERS/NSFW - DC on SCREEN #231 - Legends of Tomorrow 2x02 – The Justice Society of America | Recap & Review
In Nazi-occupied Paris, the Legends get their asses handed to them by The Justice Society of America.  The JSA finds out the Legends are from the future, that Nate Heywood is Commander Steel’s grandson, and that Rex showed up, warned them not to come to 1942, and then fizzled out of history.  Eobard Thawne shows up and offers the Nazis a super-soldier serum in exchange for an item of some sort.Nate Haywood notices his grandfather’s dog tags that he wears around his neck are missing.  They’ve been erased from history because something has now changed: his grandfather and the JSA  dies the next day, which means he will soon stop existing.The legends insert themselves into a Nazi night club, where the JSA are undercover, and start a brawl thanks to Ray not wanting to heil Hitler. Nate Heywood is discovered to be a hemophiliac, which means his blood can’t clot—a reason he was so taken with the Legends and with the stories of his grandfather—Baron Krieger uses Thawne’s super soldier serum to become a super-nazi hulk while the Legends and JSA ambush a Nazi convoy.  Everyone gets out but Ray and Vixen.Sara is put in charge by Stein, who buckles under pressure and feels that Sara is more equipped to be leader.  Ray makes a deal to make more super solider serum.The JSA/Legends mount a rescue mission, and Nate almost gets killed.  He actually won’t even heal from his hemophilia until Ray gives him an altered form of the super-serum. Now it looks like he will get powers.Finally, Rex places the amulet inside the JSA museum room, but Eobard Thawne comes, steals the amulet, and seemingly kills Rex Tyler!
Review us on iTunes for a chance to win a trade paperback, DVD, or Blu Ray valued at $15 or less!
at October 23, 2016
Email ThisBlogThis!Share to TwitterShare to FacebookShare to Pinterest
Labels: 2x02, dc comics, legends of tomorrow, podcast, recap, review, the justice society of america