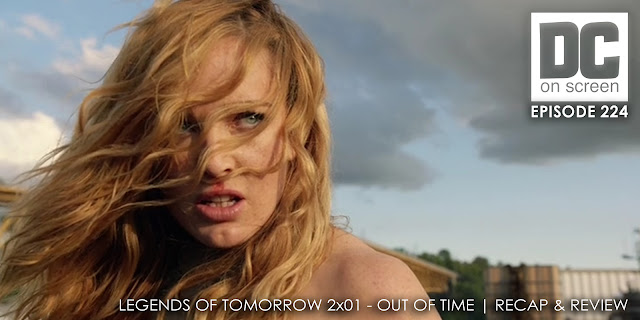 Download Legends of Tomorrow 2x01 - Out of Time | Recap & Review
 
SPOILERS/NSFW - DC on SCREEN #224 - Legends of Tomorrow 2x01 - Out of Time | Recap & Review -
Historian and self-proclaimed Time Detective Hank Heywood uncovers the presence of the Legends in various times throughout recorded history, and hits Oliver Queen up after deducing the true identity of the Green Arrow.  They find the Waverider and Mick in the Atlantic Ocean, having been in stasis since 1942.  Mick tells them the story of how the team captured Albert Einstein, stopped Damien Darhk from using an atomic bomb on New York City, and found themselves scattered throughout time.  Mick and Heywood rescue the team, but cannot find Rip Hunter. What’s worse,  it looks like they’re about to get a beat-down from the Justice Society of America!
Oh, and Eobard Thawne and Damien Darhk are playing together.
Review us on iTunes for a chance to win a trade paperback, DVD, or Blu Ray valued at $15 or less!

at October 16, 2016
Email ThisBlogThis!Share to TwitterShare to FacebookShare to Pinterest
Labels: 2x01, dc comics, legends of tomorrow, Out of Time, podcast, recap, review