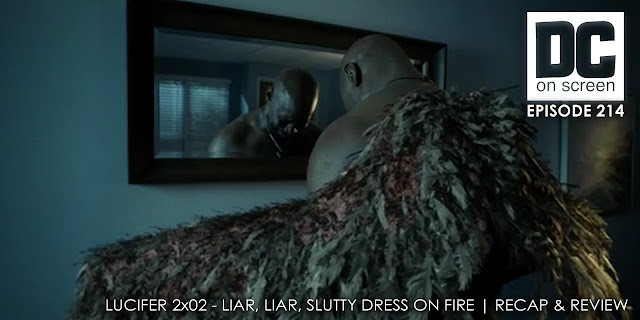 SPOILER/NSFW - DC on SCREEN #214 - Lucifer 2x02 – Liar, Liar, Slutty Dress on Fire | Recap & Review - Lucifer’s mother, after popping up in various fresh corpses all over town, finally possesses a woman named Charlotte, who  doesn’t get immediately re-killed, and finds Lucifer.  Lucifer is of course untrusting of his mother, believing she most likely killed people left and right on her way to find him.
Lucifer leaves Maze to watch Charlotte while he and Chloe investigate the murders she was involved in/the victim of.  They also argue about how to raise Trixie.
Elsewhere, Amenadiel and Linda get into a kerfuffle over his posing as a therapist last season, but ultimately leaves things as friends. Which is nice since it appears he’s dying.

Review us on iTunes for a chance to win a trade paperback, DVD, or Blu Ray valued at $15 or less!