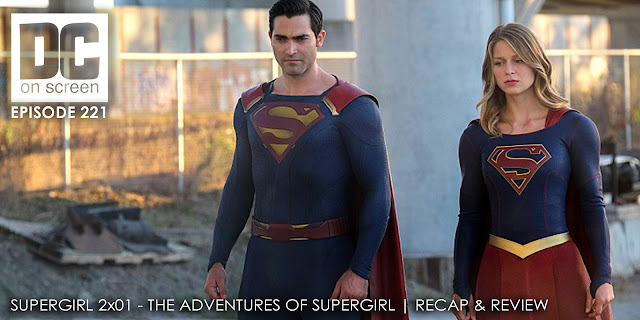 SPOILERS/NSFW - DC on SCREEN #221 - Supergirl 2x01 - The Adventures of Supergirl | Recap & Review
A maybe-kryptonian pod crashes in national city! The DEO (with Winn’s help) takes it to study the craft and its alien passenger!   Meanwhile, a space shuttle is sabotaged!  Supergirl and Superman both show up to stop it from crashing!  Cat demands Kara figure out what job she wants while James tries to figure out if Kara is still feeling the whole dating thing between them.  Clark and Kara investigate Lena Luthor, and realize she was the target of the space shuttle attack, not the perpetrator! Thanks Lex. Even has pull behind bars.  At the end, Winn has a new job with the DEO, Kara is a single reporter, and John Corben, failed assassin for Lex Luthor, finds himself at Cadmus with a new moniker: Metallo.
Review us on iTunes for a chance to win a trade paperback, DVD, or Blu Ray valued at $15 or less!