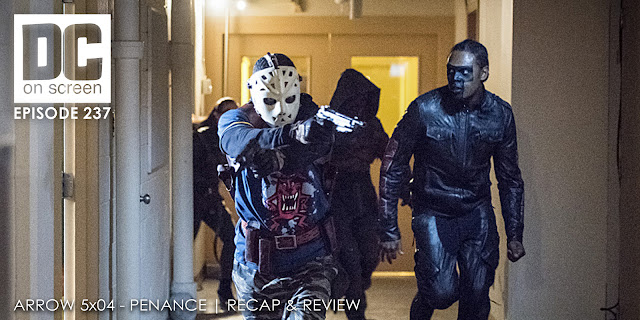 
SPOILERS/NSFW - DC on SCREEN #237 - Arrow 5x04 – Penance | Recap & Review –
The new team tries their best to stop Oliver from busting John out of military prison,  but instead Oliver hands them their asses. With Lyla’s help he busts in and convinces a reluctant Diggle to return to the team and serve his penance as part of Team Arrow. In his absence, Oliver’s new recruits try to take down Church after his raid on a baited evidence locker, which goes okay until Curtis gets shot and Wild Dog is taken hostage by Church. Oliver returns and vows to find Rene. Meanwhile, Adrian Chase decides that masks and vigilantes might be pretty useful, and the flashbacks show us the final chapters of Oliver’s Bratva initiation.
Oh, and Ragman quits the team until Felicity talks to him! Now he’s back and causing logic problems for the show!
Review us on iTunes for a chance to win a trade paperback, DVD, or Blu Ray valued at $15 or less!