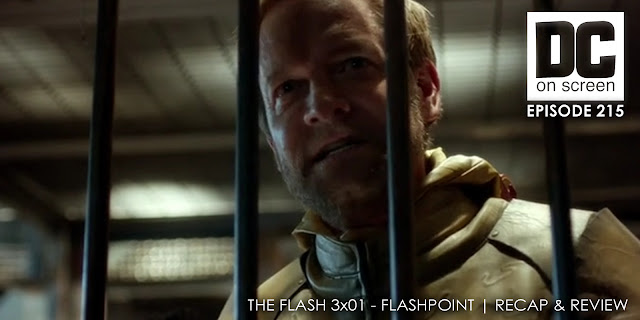 SPOILER/NSFW - DC on SCREEN # 215 - The Flash 3x01 – Flashpoint | Recap & Review - Since saving his mother from Eobard Thawne, Barry has imprisoned Thawne in an ill-defined  speed dampening chamber made of glass and metal bars, and has spent the last three months living with his parents.  There’s a new Flash in town, Kid Flash (Wally), and he’s working with Iris to take down crime in Central City—which just so happens to be primarily this cat named Edward Clariss, The Rival.
Joe’s an alcoholic, Cisco is a billionaire, Caitlin is a children’s eye doctor, Julio Mendes is police Captain, and Barry is losing his memories of the original timeline every time he uses his speed.
With Wally on the brink of death from a battle with the Rival, Barry decides he has to let Thawne kill his mother.  Returning to his own time, however, Barry finds that things are not how he left them.
Review us on iTunes for a chance to win a trade paperback, DVD, or Blu Ray valued at $15 or less!