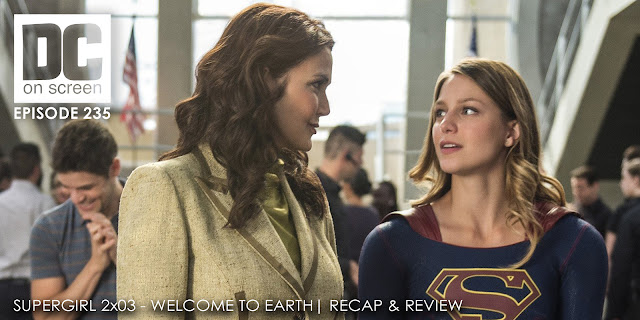 SPOILERS/NSFW - DC on SCREEN #235 - Supergirl 2x03 – Welcome to Earth | Recap & Review
Supergirl saves Wonder Woman- I mean Madam President, from seemingly Kryptonian fireballs. Alex’s investigation of the incident finds a new, frustrating local talent, Detective Maggie Sawyer, but also finds Mon-El, who is from the dreaded planet Daxam. Supergirl assumes the worst because Daxamites are, just, the worst, but reverses her stance when another assassination attempt ensues with Mon-El behind bars the whole time. With the help of Alex and Detective Sawyer they stop Scorcher, who thinks the Alien Amnesty Bill is just a cheap cover for Alien Registration.  Meanwhile, Snapper Carr gives James Olsen trouble in his first meeting, but after a pep-talk from Kara,  James shuts that shit down.  Afterward, Kara digs Air Force One so President Wonder Woman says Kara should see her OTHER jet (but she can’t—it’s invisible)! Then the President is revealed to the audience to be an alien!  Finally, after all this talk about alien rights and the discovery of a dive bar full of them, Hank decides to branch out and have a beer, only to discover the last daughter of Mars.
Review us on iTunes for a chance to win a trade paperback, DVD, or Blu Ray valued at $15 or less!