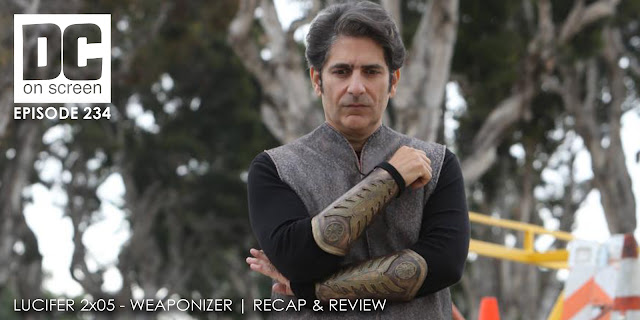 
SPOILERS/NSFW - Lucifer 2x05 – Weaponizer | Recap & Review
Uriel, little brother to Amenadiel and Lucifer, shows up to take momma home, once and for all. Amenadiel tries to stop him with pure swagger and gets his not-so-angelic-anymore ass kicked. He then has to reveal to Lucifer that he’s fallen, because, pick a sin. Lucifer takes it upon himself to upend Uriel and only briefly succeeds before Uriel’s pattern-seeking superpowers give him the upper hand.  Uriel refuses to kill Lucifer with the newly acquired Sword of Azrael, but doesn’t mind killing the demonic Maze, who arrives in hopes of punching Lucifer to safety. Maze is bested, but Lucifer manages to shank Uriel with Azrael’s sword, erasing him from both life and the afterlife. Lucifer, in a haze of shock and sorrow, embraces his mother.
There was also a procedural story where Lucifer and Chloe tried to solve the murder of an 80’s action star that both Lucifer and Dan were really enthusiastic about. It has Asian Magneto from Agents of SHIELD, Cordelia from Buffy, and Hermes from Futurama.  It tied in with the better story because Lucifer was aware the Uriel was trying to off Chloe through causation patterns.
Review us on iTunes for a chance to win a trade paperback, DVD, or Blu Ray valued at $15 or less!