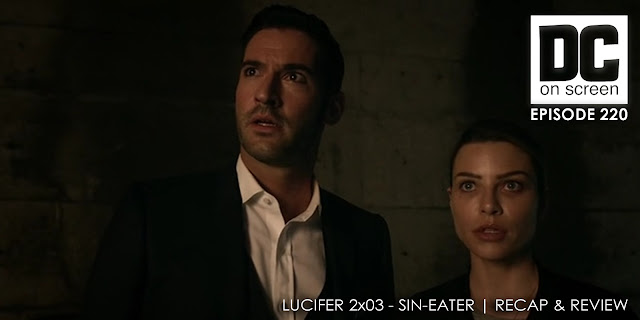 
SPOILERS/NSFW - DC on SCREEN #220 - Lucifer 2x03 - Sin-Eater | Recap & Review
Someone’s running around punishing people and posting video of it online! Lucifer obviously wants to take the person who’s imitating him out of the game.  Their investigation takes them to a social media upstart, Wobble where Leila Simms, played by Robin Givens helps them figure out who could be killing people… until it looks like it’s her.  But of course it’s not. It’s Ray, the head of human resources who wears a Def Leppard shirt. Because we saw him for a couple of minutes.  And we were supposed to be distracted by Robin Givens.
In other news, Chloe and Dan decide to get divorced (I thought they already were), Amenadiel hides his worsening condition from Maze, and comes for a visit to find Charlotte instead of Lucifer, while Lucifer decides to punish their mother by making her stay Charlotte.  No one knows that she has super powers, of course.
Review us on iTunes for a chance to win a trade paperback, DVD, or Blu Ray valued at $15 or less!