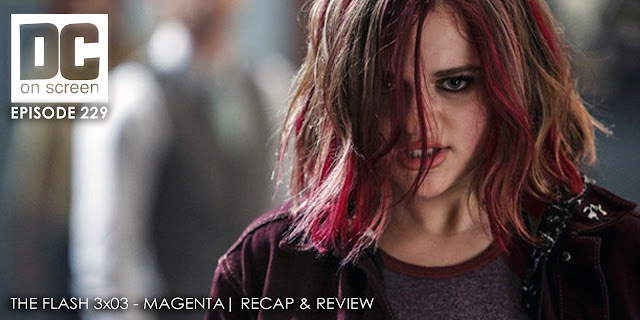 Download The Flash 3x03 - Magenta | Recap & Review
 
SPOILERS/NSFW - DC on SCREEN #229 - The Flash 3x03 – Magenta | Recap & Review
Jesse and Harry make their way back to Earth One, and find that things have changed.  They therefore know that Barry mucked with the timeline.  Jesse has gained speedster powers, and Harry doesn’t want Jesse to become a superhero.  She wants nothing more.  Wally’s disappointed Jesse got powers after getting hit with the dark matter, and he didn’t.  He has dreams about getting powers just like Magenta does, and seems to be bent on getting speedster abilities any way he can.  Magenta, was created by Dr. Alchemy, hospitalizes her abusive foster father, and almost drops a freaking ship on the hospital to do away with him once and for all!  Luckily, The Flash and Jesse Quick were there to stop her!  After helping Flash save the hospital, Harry gives Jesse his blessing—and a badass new suit! Also, cute Iris and Barry things happen.
Review us on iTunes for a chance to win a trade paperback, DVD, or Blu Ray valued at $15 or less!
at October 23, 2016
Email ThisBlogThis!Share to TwitterShare to FacebookShare to Pinterest
Labels: 3x03, dc comics, jesse quick, magenta, podcast, recap, review, the flash