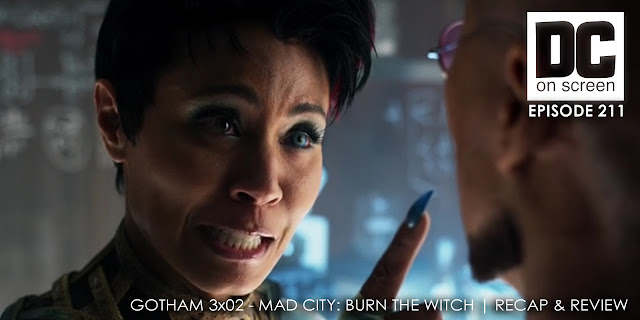 Download Gotham 3x02 - Mad City: Burn the Witch | Recap & Review
 SPOILERS/NSFW - DC on SCREEN #211 - Gotham 3x02 - Mad City: Burn the Witch | Recap & Review Gordon and Vale track down Fish Mooney… who has in turn kidnapped Bullock and forced him to tell her the location of Professor Hugo Strange in hopes that he can save her from death… And raise her an army of monsters... Penguin is causing a hub-bub, getting angry mobs together to do what he claims the police can’t – kill Fish and the Indian Hill monsters. At the end of the day, the police, penguin, and penguin’s mob show up where the government and police are holding Strange to get Fish once and for all. Jim sneaks in, makes a deal with Fish to save Bullock, and delivers her into the hands of Penguin. Fish talks her way out of death by Oswald, though. Somewhere in there, we have the new Ivy who murders a nice guy who didn’t water some plants. Also happening this episode, Bruce has a meeting with a ghoulish representative of the Court of Owls named… Catherine? Oh… okay. But she’s still scary enough to make Bruce agree to stop investigating them, Indian Hill, his parents’ murders… pretty much he has to promise to butt out and be a freaking kid. Except when he gets back home, doppleganger shows up. In the end, Jim and Valerie finally break all of the two-episode sexual tension and get down while Lee Thompkins gets off a train in the 1940s… or present day Gotham. I think that’s what we were supposed to see.
at October 02, 2016
Email ThisBlogThis!Share to TwitterShare to FacebookShare to Pinterest
Labels: 3x02, Burn The Witch, gotham, Mad City, podcast, recap, review, S03e02