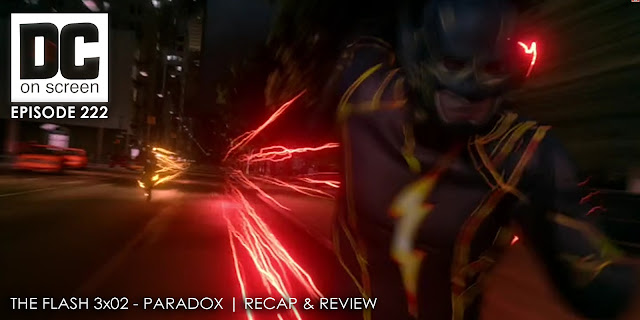 Download The Flash 3x02 - Paradox | Recap & Review
 
SPOILERS/NSFW - DC on SCREEN #222 - The Flash 3x02 - Paradox | Recap & Review
With help from Jay Garrick, the Flash of Earth-3, Barry realizes that he cannot restore the timeline.  Iris never forgave Joe for lying about her mother’s death, Cisco lost his brother Dante (and won’t forgive Barry for not going back in time to save him), and Edward Clariss, the Rival of the Flashpoint Universe somehow remembers everything, and has his powers.  To salvage his life, Barry missions to inform the team of his terrible decision, and convince them all to pull together to help him stop Clariss.  Of course, there’s also Dr. Alchemy, the bizarre husks being left around town, Barry’s office mate Julian Albert who hates and distrusts him, and Caitlin’s Killer secret.
Review us on iTunes for a chance to win a trade paperback, DVD, or Blu Ray valued at $15 or less!