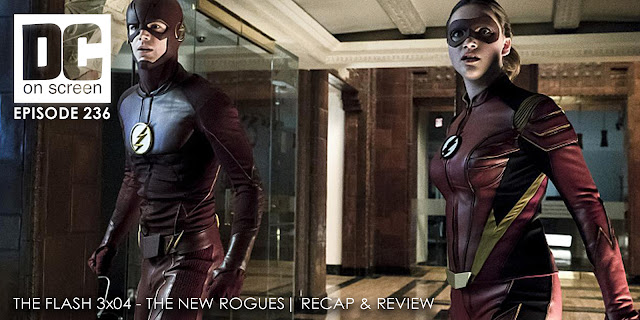 SPOILERS/NSFW - DC on SCREEN #236 - The Flash 3x04 – The New Rogues | Recap & Review
Jesse and Harry are still around and training, which has turned Barry into Oliver. Wally and Jesse are getting closer, which has turned Harry into a curmudgeonly father. Cisco, Caitlin and Harry agree that Harry will need to leave soon and must be replaced, which turns their group into a trans-dimensional fishing expedition. Barry and Iris are finally getting romantic, which is just plain freaking Joe out, which is in turn freaking Barry out. Also, Sam Scudder, aka the Mirror Master, has been inadvertently released from his reflective period and wants revenge against Leonard Snart. He finds his old love, now known as Top, discovers that Snart is out of the picture, and goes on a mirror-themed crime spree, eventually trapping the Flash in a mirror. Harry and Cisco try to free Barry but their freezer-themed technology isn’t powerful enough so, Caitlin has to sneak in and crank up the frost. Barry stops Mirror Master, Jesse stops Top, Caitlin keeps her secret, and the fishing expedition finds a new Harry who wants to be called HR likes Big Belly Burger just as much as Earth 2 Harry.
Review us on iTunes for a chance to win a trade paperback, DVD, or Blu Ray valued at $15 or less!