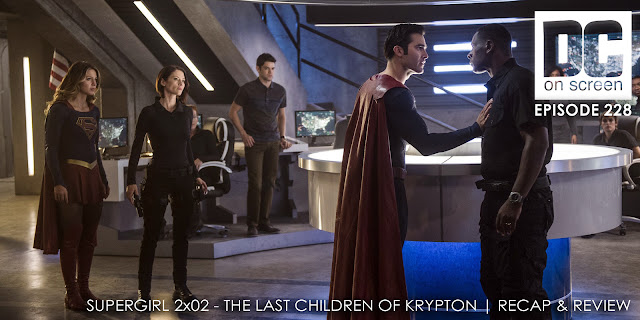 Download Supergirl 2x02 - The Last Children of Krypton | Recap & Review
 
SPOILERS/NSFW - DC on SCREEN #228 - Supergirl 2x02 - The Last Children of Krypton | Recap & Review
James temporarily has Cat’s job!  Kara doesn’t have a job! At least that’s what her mean new boss Snapper Carr says! The mysterious stranger from the Kryptonian pod is sapping the DEO’s power to heal!  And there are TWO Metallos!  CADMUS unleashes them on Superman and Supergirl after announcing their alien-killing selves to the world.  Also in this episode, J’onn and Superman debate J’onn’s keeping Kryptonite.  Of course, Cadmus got their hands on Kryptonite because the DEO has a mole.  Alex and Winn figure out who it is, and stop them, then Alex, who feels left out since Clark’s been around, talks about her feelings with Kara and wears that mech armor from last season to help Kara and Clark fight the Metallos with J’onn in tow.
In the end, J’onn lets Clark destroy the rest of the DEO kryptonite, Clark goes back to Metropolis, Supergirl says goodbye to Cat, and lets the pod traveler know that when he wakes up, she’ll be there to help guide him… and of course, he wakes up, and starts choking her!
Review us on iTunes for a chance to win a trade paperback, DVD, or Blu Ray valued at $15 or less!
at October 23, 2016
Email ThisBlogThis!Share to TwitterShare to FacebookShare to Pinterest
Labels: 2x02, dc comics, podcast, recap, review, supergirl, superman, The Last Children of Krypton