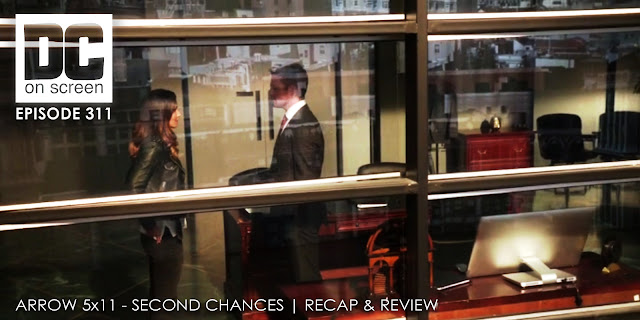  
SPOILERS/NSFW - DC on SCREEN #311 Arrow 5x11 - Second Chances | Recap & Review Drug dealer Sean Sonus makes undercover CCPD officer Tina Boland watch as he kills her partner.  Of course, this all happened three years ago on the night that particle accelerator exploded in Central City. This gives Tina a sonic cry and Sonus a special ability of his own. In present day, Adrian informs Oliver that the NSA has started an investigation against Walker, but the files aren't accessible. Oliver sets Felicity on the task of finding the files while taking Curtis and Rene to Hub City to recruit Tina. She's finally tracked Sonus down and plans to get revenge. She initially refuses to join, but eventually Oliver reveals his identity in an attempt to convince Tina, who later attacks Sonus during a deal. Oliver's team helps her defeat the bad guys, but Oliver fails at stopping her from killing Sonus. Meanwhile, a fan of Felicity's former hactivism lifestyle gives her the files she needs to free Diggle, but also inspires her to begin traveling her hacktivism road once more. Tina shows up to tell Oliver that she's decided to join the team, and reveals her name to really be Dinah Drake. In flashbacks, Talia helps Oliver kill Kovar's buddy, and it turns out she trained Yao, and gives him the Season 1 suit