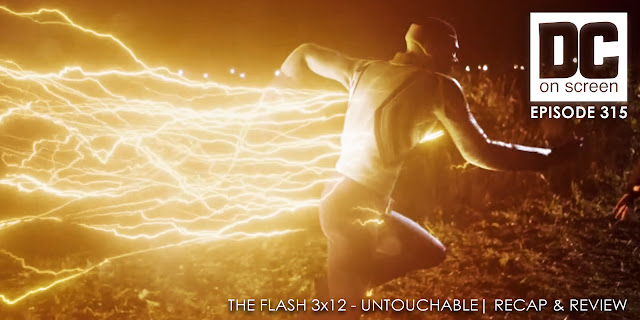 Download The Flash 3x12 - Untouchable | Recap & Review
 
SPOILERS/NSFW - DC on SCREEN #315 - The Flash 3x12 - Untouchable | Recap & Review Barry is trying to train Wally for his encounter with Savitar, but Flashpoint villain Clive Yorkin shows up and starts disintegrating some familiar faces.  His quest for revenge involves killing Joe, but having failed at killing him directly, he realizes killing Iris would be at least as good.  Wally shows up to save her, but can’t get it done.  Iris gets the touch of death,  and is fading fast.  Caitlin is forced to go Killer Frost to freeze Iris’ arm to stem the damage. She almost loses her battle with Frost though until Julian talks her off the ledge.  Yorkin, still at large, goes after Joe directly, forcing Barry to expand his skillset and phase an entire train full of people through a roadblock.  Wally, who has been having trouble learning to phase, gets the inspiration he needs to use his speedster blood to reverse Yorkin’s powers as he phases through him.  Meanwhile, the families of Joe and Cecile have successfully met, and that went over okay, especially for Wally, who has found a super fan in Cecile’s Daughter.  Also, the tension between Caitlin and Julian has developed into fondness as Caitlin finally invites Julian to grab a drink, and Iris is feeling slightly better about the Flash being able to save her at the end of the day.  Finally though, we get a breach over from Jesse Quick, who informs Wally that Harry has been kidnapped by none other than Gorilla Grodd.