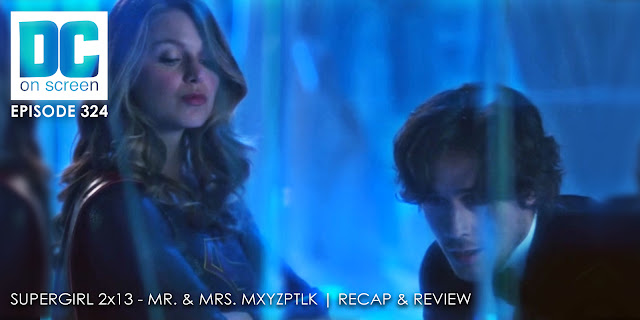 Download Supergirl 2x13 - Mr. & Mrs. Mxyzptlk | Recap & Review
 
SPOILERS/NSFW - DC on SCREEN #324 - Supergirl 2x13 - Mr. & Mrs. Mxyzptlk | Recap & Review Mr Mxyzptlk is out to get him a Supergirl.  He comes bearing promises of showing her the world, but she’s not into it.  Mon El, who has seen 5th dimensional beings before, is feeling a little more hostile about this intrusion.  Supergirl swears that she can take care of the little imp, but Mon El steals some 5th dimensional tech to challenge Mxy on his own.  He fails, and Kara swears that she and Mon El are fundamentally wrong for each other.  She also agrees to marry Mxy, but only if it’s done at the Fortress of Solitude.  When Mxy arrives she explains that she will never marry him, and has set off a bomb that will destroy them both.  He pleads that the world needs Supergirl, and she reluctantly agrees to let him disarm the bomb, which is a ploy to get him to spell his name backwards which banishes him back to the 5th dimension.  Elsewhere, Winn has found a feisty woman from Starhaven to take a chance with, and Maggie overcomes her Valentine’s trauma to make a special moment for Alex.  Finally, a humble Mon El admits he was wrong,  and Kara admits she was lying about whether they could be together.  Then they appear to get very together.