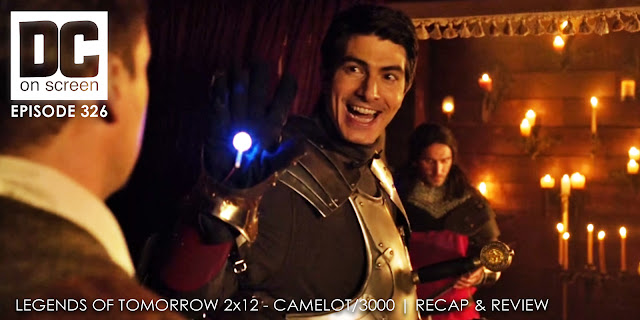 Download Legends of Tomorrow 2x12 - Camelot/3000 | Recap & Review
 SPOILERS/NSFW - DC on SCREEN #326 - Legends of Tomorrow - Camelot/3000 | Recap & Review Rip makes a quick run to the future to confront and murder Dr Midnite, giving him the 2nd of 4 pieces of the Spear of Destiny. The Legends, who arrive too late to intervene, find the aftermath and a neat piece of mind control tech. Their next stop is Camelot, which it turns out is real. Stargirl has carefully influenced this time period so that it becomes the Camelot of Legend, where she is hiding herself as Merlin and the 3rd spear piece as the sword in the stone. The Legends arrive and quickly befriend the Round Table in general but Rip and Damien show up with a mind-controlled King Arthur and threaten to kill the king if the spear piece isn’t delivered to them. After much debate, Stargirl does eventually hand the piece over to Vixen, seemingly avoiding the need for the Legends to participate in a doomed defense of Camelot. But Ray is just too inspired to help himself and refuses to leave the kingdom behind. Eventually, the rest of the team decides they have to help Ray and Camelot as well. After Jax discovers the way to use the mind control tech they found earlier, Rory focuses his years of personal torment into the device, which destroys the tech keeping Rip’s army subservient to him. Arthur seemingly slays Rip on the battlefield and Damien leaves him for dead. Sara, however, saves him, which may be a bad idea because Gideon still responds to Captain Rip, even if he’s evil.
Labels: 2x12 camelot/3000 dc comics legends of tomorrow podcast recap review