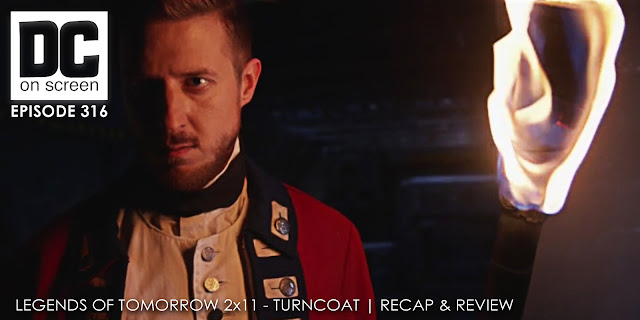 Download Legends of Tomorrow 2x11 - Turncoat | Recap & Review
 
SPOILERS/NSFW - DC on SCREEN #316 - Legends of Tomorrow 2x11 - Turncoat | Recap & Review The Legends head to Christmas 1776 to save George Washington, who will be murdered by Evil Rip, and also has already been murdered by Evil Rip, but not quite because cementing time and whatnot.  Anyway, they have to save George. The Legends arrive at a Christmas party, and get ambushed by Evil Rip and his EMP grenade. The result is a kidnapped Mick and Georgie, a Ray that’s stuck in his tiny dead suit, and a Sara left for dead with a shot in the gut. They get Sara back to the ship, but Stein can only do so much to keep her going. As the ship is assaulted by Evil Rip’s forces, Jax is forced to do his best to defend the ship with sticks and stones. Evil Rip and his army rip down the door, chases down Sara and Jax, and Jax is forced to hand over a piece of the Spear of Destiny in a futile attempt to save Sara’s life. Luckily, Ray outruns a rat, and gets power restored in time to get Gideon online and save Sara’s life. Later, Jax seeks revenge on Evil Rip, but just can’t pull the trigger after a healthy-ish Sara talks him down. Elsewhere, Nate and Vixen’s search for Mick and Washington take a turn for the unexpected, and they make with the nasty. But they’re just chilling, so it doesn’t mean anything, much to Nate’s chagrin. All the while, the fate of George friggin Washington seems to be in the hands of Mick Rory, who is amused by George’s insistence that the British will treat their captives with the honor they deserve. After George is sentenced to death he decides to listen to Mick and they make their daring escape, aided by Nate and Vixen, who have finished adult hugging. After saying goodbye to George, who proclaims Mick a national treasure, they all make their way back to the ship for some Christmas dinner, presents and Captain Sara pep talks about recovering the Spear.